BitMEX used to be the indisputable leader of Bitcoin (BTC) futures trading and if something similar to yesterday’s civil enforcement action were to happen back in 2015-2018 the crypto markets would have completely collapsed.

Regardless of partial recovery to $10,600, which was relatively quick, derivatives markets held steady during the $500 drop down to $10,400. Neither BTC futures or options displayed any signs of discomfort to the negative news.

The futures market nearly ignored the entire event and this is a strong indicator that investors remain bullish. It also suggests that markets will be testing $12,000 sooner than one might expect. 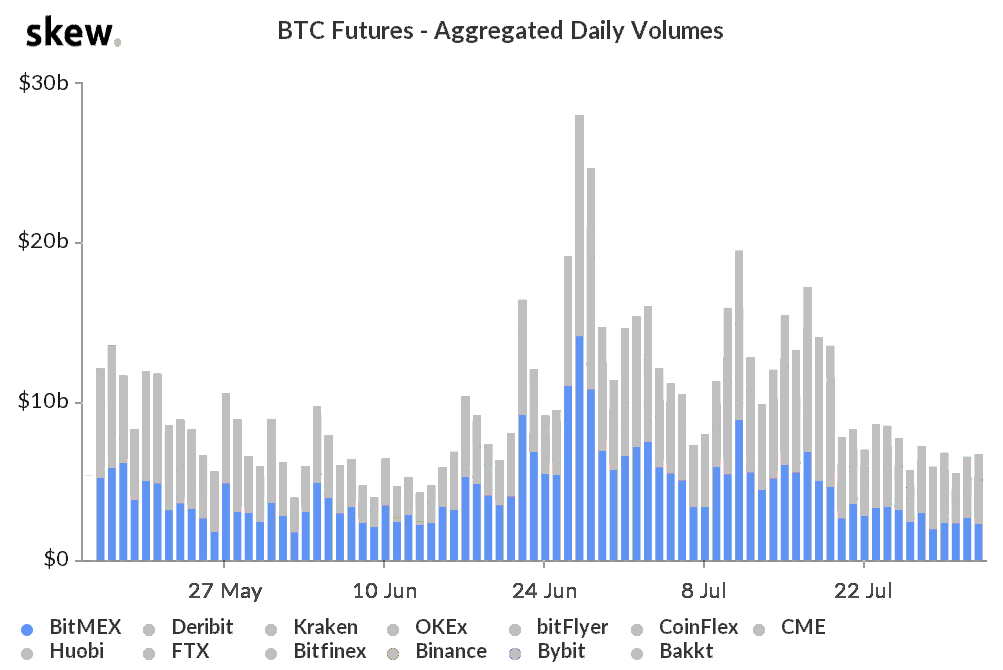 As shown above, BitMEX held nearly 50% of the market share until July 2019. This advantage came from being the precursor of the so-called perpetual contracts (inverse swaps) market. In addition to not requiring KYC, the derivatives exchange also offered up to 100x leverage and this helped in growing a vast user base.

After the Black Thursday market correction saw Bitcoin price drop below $3,600, competitor exchanges scrambled to offer similar services and this led to BitMEX losing its dominant position throughout 2019.

Some in the crypto community believe that BitMEX’s ban of U.S. clients was the primary culprit for the loss of market share, and others point to their aggressive liquidation engine as the catalyst.

During the March 13 crash, BitMEX faced technical difficulties and went offline for 25 minutes. Somehow, as the outage occurred and Bitcoin price crashed below $4,000, BitMEX’s insurance fund was able to increase its holdings by 1,000 BTC over the next 48 hours. Since that event, the open interest on BitMEX futures has been pinned below $1 billion. 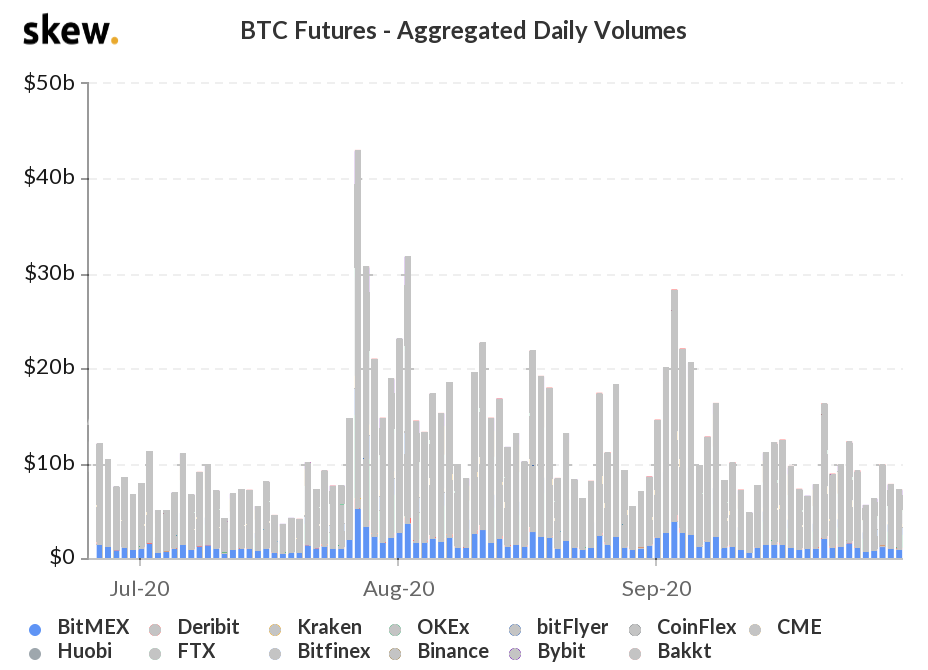 Looking at more recent data, BitMEX has become almost irrelevant in terms of volume. Over the past three months its market share hovered around 18% and while it is impossible to measure the exchange’s impact on BTC pricing, it clear that it’s lost its edge over the past eighteen months.

The basis indicator compares futures contracts price to the current level at regular spot exchanges. It is also commonly referred to as a futures premium.

Healthy markets usually display a 5% to 15% annualized basis, in a situation known as contango. On the other hand, a negative basis (discounted futures) usually occurs during heavily bearish markets.

The above chart shows a 5.4% or higher annualized 3-month contract premium for every exchange except BitMEX. Essentially, professional traders are signaling that their expectations were not harmed by yesterday’s events.

If anything to be taken away by yesterday’s news, it’s that this is an exchange-specific issue with little to no impact on overall futures markets.

It is worth noting that the futures premium can remain relatively steady while investors are closing their positions. This would undoubtedly be a very worrisome situation, as it would signal that traders are worried about the exchanges’ liquidity.

From this perspective, open interest is the most critical evidence of investors confidence in a particular market or exchange.

Even if the total aggregate figure didn’t change, an exodus from BitMEX to other exchanges would be reflected in open interest data. 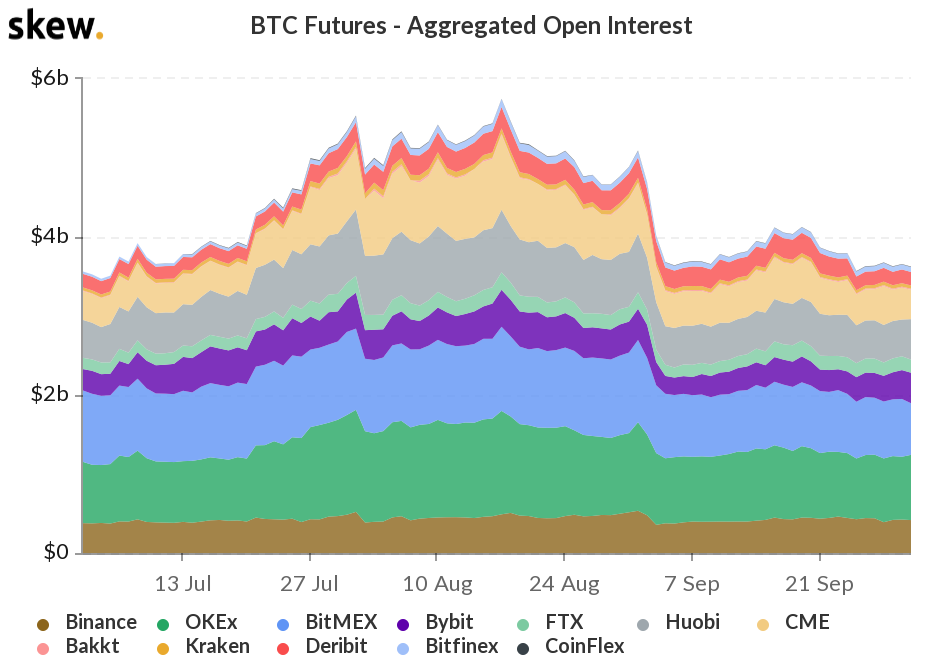 Take notice of how uneventful yesterday’s news was. BitMEX’s open interest has held $650 million, down 11% from the previous day, while the aggregated figure was mostly unaffected.

Huobi absorbed most of the change, indicating that some traders likely moved their positions.

The 25% delta skew is useful for gauging professional traders’ sentiment through options pricing. By comparing the implied volatility of similar-risk put and call options, an investor can assert whether it is more expensive to buy call (bullish) or put (bearish) options. 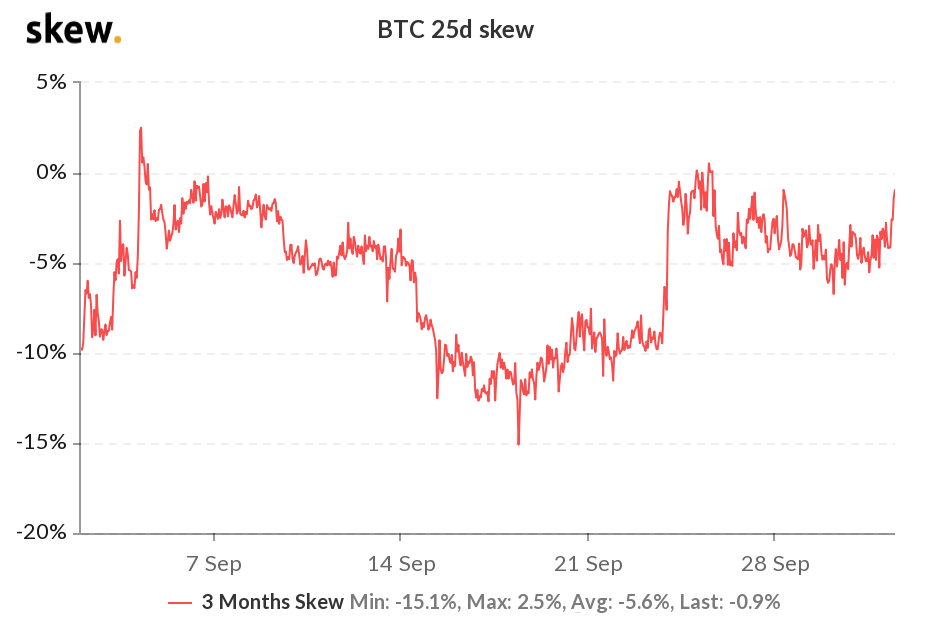 The chart above shows that the 3-month options 25% delta skew has held in neutral terrain. A negative indicator means implied volatility for calls is larger than puts, signaling a slightly positive market expectation.

The indicator has been oscillating between 0% and -5% for the past week, and is far away from a bearish scenario. If anything, yesterday’s move can be deemed uneventful for options sentiment.

In bull markets, bad news is easily cast aside

There is no better indicator of a bull market than bad news. Regardless of BitMEX’s diminishing importance in volume and pricing, a government-backed action against a top-5 exchange would certainly have dampened the price had market sentiment been neutral or negative.

Investors and crypto advocates should also factor in Kucoin’s $150 million hack just 6 days ago. It literally had zero impact on Bitcoin price at the time. Now imagine those events happening a year ago, when BTC was in a downtrend after a failed $14K test as followed by a top formation at $12K.

Meanwhile, as all of this BitMEX scandal takes place, gold touched a 2-month low at $1,850 on Sept. 28 and has now partially recovered to $1,900. There are also discussions to finalize a second round of economic stimulus to the tune of $2.2 trillion and in less than 30 days the U.S. will have its presidential election.

Historically, all of these events tend to inject uncertainty into the markets and the fact that   Bitcoin derivatives’ data continue to hold steady during such turbulent news flow suggest that $12K may be tested sooner than one might think.

The views and opinions expressed here are solely those of the author and do not necessarily reflect the views of Cointelegraph. Every investment and trading move involves risk. You should conduct your own research when making a decision.

Hotel Bitcoin ATMs on the…