The number of people sending Bitcoin to major cryptocurrency exchanges has declined in recent months, according to data from London-based crypto research firm TokenAnalyst.

Specifically, the data showed that the number of addresses sending BTC to Bitfinex and Binance–two of the world’s largest cryptocurrency exchanges by volume–have dropped considerably. Bitfinex’ numbers are at a two-year low, while the addresses sending BTC to Binance have dropped down to levels not seen since early 2018. According to data from SimilarWeb, online traffic to both exchanges is also at a four-month low.

Sid Shekhar, who co-founded TokenAnalyst, said to Bloomberg that the decline in the number of addresses can be attributed to a “lack of retail interest in general currently in crypto.”

This theory runs counter to the narrative that paints Bitcoin as an alternative to fiat currencies that are losing their value. “If we go by the ‘Bitcoin as safe haven in times of recession’ narrative, the number of new users/buyers should actually be increasing,” Shekhar explained.

What does this mean?

In isolation, this data could point to a consolidation of Bitcoin trading amongst fewer hodlers who have larger amounts of BTC. However, data from Blockchain.com shows that Bitcoin trade volume is at its lowest point since May of this year, following its peak in late 2017. 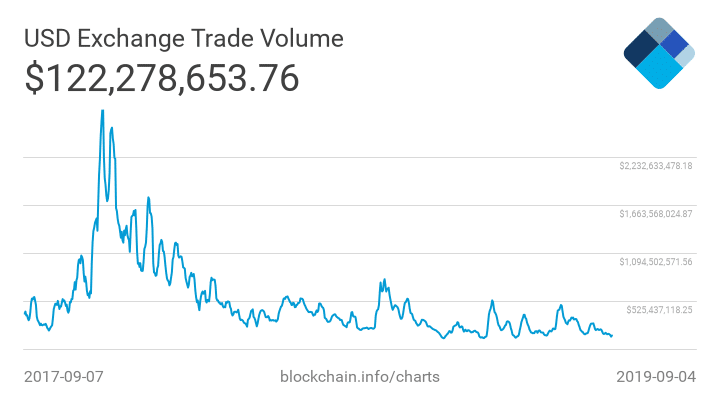 It isn’t just Binance, Bitfinex, and other relatively large exchanges that are suffering from lower numbers of users–in August, a report from Business Korea claimed that the vast majority of South Korean cryptocurrency exchanges are on the edge of bankruptcy due to low transaction volume.

How to Prepare for CySEC’s New Tiered LeverageGo to article >>

“Only five or six South Korean exchanges rank among the top 100 in the world in terms of transaction volume,” the report said. “It is no exaggeration to say that 97 percent of domestic exchanges are in danger of going bankrupt due to their low volume of transactions.”

In spite of the fact the low trading volume seems to be a major problem for exchanges, the price of Bitcoin and many other assets has continued to rally since April of this year. What gives?

The fact is that Bitcoin trading is difficult to keep track of: “crypto user data is difficult to monitor due to the anonymous nature of the ownership of the assets,” said a report from Bloomberg.

And while exchanges have suffered, crypto tracking service Chainalysis found that Bitcoin on-chain transaction activity has nearly quadrupled this year, peaking in July, which could suggest that an increasing number of trades are happening through OTC desks and peer-to-peer transactions.

To cope with falling transaction volumes, exchanges are changing their tactics: instead of attempting to onboard more newer users, exchanges seem to be focusing their attention on individuals that Bloomberg described as “power users.”

Indeed, a growing number of exchanges has “rolled out or expanded availability of margin trading, letting users borrow funds to speculate.” For example, “Binance began user testing its futures products this month, after allowing traders to lend out their funds to others in August.”

A trading platform that is well-stocked with a wide range of products and services can easily build customer loyalty. Jeff Dorman, chief investment officer at LA-based asset mangement firm Arca, told Bloomberg that “The more products you offer, the more sticky your client. All consumers prefer a ‘one-stop shop.’”