The price of Ether (ETH), the native token of the Etheruem network, is continuing along the tear that it has been on throughout 2021. Earlier this week, ETH hit the latest in a series of all-time highs. The latest peak occurred on May 4th, when the coin jumped passed $3,400. At press time, the price had cooled off to $3,335. 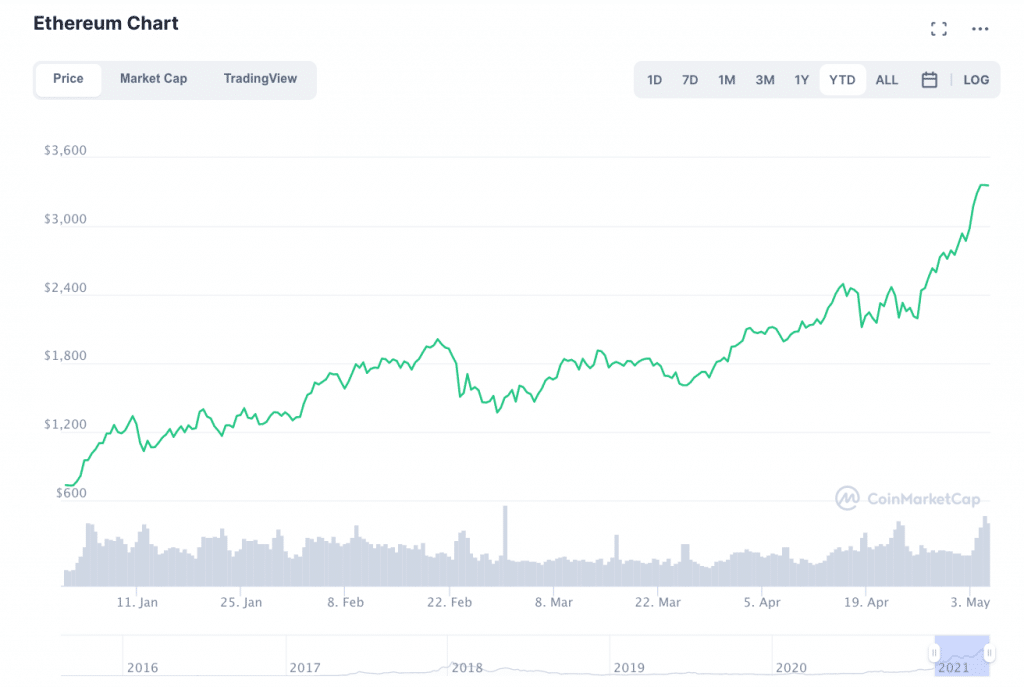 Why is this? Investor and analyst Scott Melker (aka “The Wolf of All Streets”) told Finance Magnates that “the perfect storm has been brewing for Ethereum over the past few months, and it was only a matter of time until price exploded to the upside.”

This “perfect storm” consists of several key ingredients: for one thing, capital markets have shown quite a bit of growth in response to changing economic conditions–specifically, as the United States Federal Reserve and other national banks have continued quantitative easing efforts in response to the COVID-19 financial crisis.

In crypto markets, this has been reflected in Bitcoin and altcoin prices. “Traders have been expecting [Ether] to follow in the footsteps of Bitcoin’s breakout,” Melker told Finance Magnates.

At the same time, “investors are praising Ethereum’s progress towards Eth2.0 with the Berlin hard fork,” he said. Berlin is an important landmark on Ethereum’s journey towards the upgrade to Eth2.0. It incorporates four Ethereum Improvement Proposals (EIPs) that are slated to lower the network’s transaction fees and allow for new kinds of transactions.

Scott Melker: “my hottest take is the small chance that Ethereum’s market cap overtakes that of Bitcoin.”

With Berlin in the rearview mirror, Melker pointed out that the network is closer to the London hard fork, which will activate EIP 1559. The proposal will bring substantial changes to Ethereum’s fee structure, and will also “burn” a portion of transaction fees. Effectively, this will introduce a scarcity mechanism and lower the total circulating supply of Ether, which could make ETH into a “hard” asset.

Ethereum enthusiasts believe that this introduction of scarcity into Ether could sent the ETH price through the roof. “Fundamentalists are gearing up for a supply-side shock due to the imminent implementation of EIP-1559, and the media is just starting to pick up the crumbs,” Melker said.

I have been calling for $3600 $ETH for well over a month, but think it can go much higher. Here’s a video from early April.https://t.co/HHalVXk6IX

“Ethereum’s 2.0 transition is monumental – it is the largest protocol upgrade to ever occur in the crypto space, with Ethereum experts pointing to the fact that the recent upgrades and merges are akin to a Bitcoin halving times three (x3),” he said.

“This ‘triple halving’ will reduce about 90% of daily sell-side pressure, leaving nothing but clear skies for price discovery. I anticipate $10,000 Ethereum this bull cycle,” Melkert continued.

However, “my hottest take is the small chance that Ethereum’s market cap overtakes that of Bitcoin.”

Well, there’s no universal law that saw that it couldn’t.

Ethereum’s growth so far has been measured in comparison to other networks in and out of the cryptocurrency space. When ETH was hitting new all-time highs earlier this week, a number of headlines compared the network to some of the largest corporations and traditional payment institutions and networks in the world. Several headlines have noted that Ethereum is now larger than Bank of America; one pointed out that Ethereum is now larger than Nestle, P&G and Roche.

But could Ethereum really stand a chance of surpassing Bitcoin? To answer that question, it may be important to take a look at how both of these assets derive their value.

Reasons to Invest in Precious Metals in 2021Go to article >>

Bitcoin is increasingly seen and spoken of as a “store-of-value” or “hedge against inflation.” In other words, its primary function is to hold value, much like a kind of “digital gold.” Why is this? The Bitcoin network isn’t particularly fast (transactions can take hours) or efficient (fees can cost hundreds of dollars). Bitcoin also can’t realistically support smart contracts or decentralized application (dApp) development.

However, Bitcoin does have one thing going for it: scarcity.

When Bitcoin was launched, its creator designed the network so that only 21 million BTC could ever exist. These BTC are slowly released from the total supply as transactions are confirmed. At press time, there were 18.7 million BTC in circulation. An estimated 20 percent of these coins have been permanently lost, setting the circulating supply even lower.

How does ETH derive its value?

So far, the narrative around how ETH derives its value has been quite different from Bitcoin’s value proposition.

This is primarily because the Ethereum network has a relatively higher level of functionality than Bitcoin. While Ethereum faces some similar scalability issues to Bitcoin, Ethereum can support smart contracts, and thus, the creation of dApp development. While Etheruem isn’t the only smart contract-enabled network, its large community of developers and users have led many to describe it as the “backbone” of decentralized finance (DeFi).

What is DeFi? You may have heard the term already, so here’s the TL;DR: DeFi systems are designed to replace centralized financial services with decentralized solutions. Instead of getting a loan from a bank, you could get one from an automated dApp; instead of relying on a centralized asset exchange, you can securely trade on a decentralized exchange.

Many analysts have described DeFi in its various forms as Ethereum’s “killer app.”

“Ethereum also has an invested and growing community of users and developers alike. Over 200K developers are committed to the network, while MetaMask has recently reported over five million active monthly users,” Boyko-Romanovsky explained. “The value of Ethereum is partly rooted in its magnificent network size and adoption rate.”

How will Eth2.0 improve Ethereum’s functionality?

In other words, the growth of DeFi has played an extremely important role in the growth of the price of ETH. However, many analysts agree that some of the technical limitations that the Ethereum network has faced have prevented it from reaching its true potential–which is why the upgrade to Eth2.0 is so important.

In addition to introducing scarcity to Ether, the upgrade will also address Ethereum’s scalability issues. At present, Ethereum can only process an average of 30 transactions per second; transaction fees on the network can cost as much as (or more than) $100.

Because transactions on the Ethereum network play a key role in smart contracts and dApps, these limitations have been listed as the reasons why the growth of DeFi–and Ethereum along with it–has been stunted.

However, the upgrade to Eth2.0 is slated to fix these problems. After the upgrade is fully installed, the network could reportedly process as many as 100,000 transactions per second (for reference, the VISA network processes 3,000-4,000 TPS).

Additionally, the price of these transactions is slated to be lowered by the installation of Eth2.0, though transaction fees on the base layer of the network may still be impractically high for casual usage. However, layer-2 solutions that could be introduced after the Eth2.0 installation goes live. Therefore, the removal of these technical hurdles could grow DeFi on Ethereum–and the price of ETH along with it.

The installation of Eth2.0 will also switch the Ethereum network from a Proof-of-Work (PoW) algorithm to a Proof-of-Stake (PoS) algorithm. The new algorithm will financially incentivize users to lock their ETH tokens in the network for an extended period of time, a factor that could contribute to ETH price stability over the longer term.

“First from its role as collateral in DeFi; second, through the ability to earn rewards via staking; and third, the claim on fees that will be used to reduce the overall supply.”

In other words, Ethereum’s establishment as the “backbone” of DeFi; its upcoming staking mechanism, and the scarcity mechanism that will also be introduced within the next several months. “The ETH2 upgrade will make all three of these components fully-delivered, putting to rest concerns about the long implementation timelines associated with these changes,” Ogilvie said.

Could Ethereum outgrow Bitcoin? Let us know your thoughts on the comments below.

A Decade of Self-Professed Satoshi…

US City in North Dakota…

As Bitcoin Drops in Value,…

Shortsighted Sellers Made This A…

The Fear Factor: A Volatility…